Paul Stamets of British Columbia is a mycologist who has discovered some fascinating results in his research on the fungi we call mushrooms!

There are mushrooms which can clean up the oil from oil spills, beehive-like Agarikon dangles that can provide a defense against weaponized smallpox. It is amazing to think about what potential tools we can find to reverse the damage we’ve done to the planet and they are all naturally occurring in nature.

Some types of mushrooms can even be used to help people to manage mental health conditions such as anxiety and depression. Psilocybin, the active ingredient found in magic mushrooms, or shrooms, is a powerful psychedelic that is being investigated for its potential medical benefits. Psilocybin is a psychedelic tryptamine.

These types of chemicals have a structure very similar to the structure of serotonin, a chemical messenger with important roles in the brain and digestive system. Because of this similarity, psilocybin can bind to receptors in the brain that are meant for serotonin. This binding and activation of serotonin receptor sites therefore correlates with the manifestation of psychedelic effects.

Correspondingly, it is thought that psilocybin works by suppressing parts of the brain that filter out information from the senses. This causes more sensory information to reach conscious levels of thought, causing hallucinogenic effects and changes in perception. You can learn more about the potential health benefits of magic mushrooms by doing some research into shrooms online.

Stamets also has written a book, Mycelium Running: How Mushrooms Can Help Save the World. He believes that these particular mushrooms can serve as revolutionary tools in the fields of medicine, forestry, pesticides and pollution control. To find out more information check out this link to a full article with Stamets. 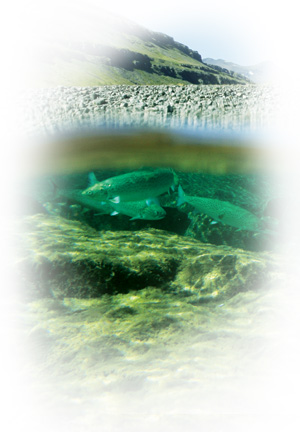 A hydro-magnetic system, the first of its kind, was made by the scientists at Omni Enviro and installed in the Sochi River near the Black Sea in western Russia. This system is a hydro-technical structure installed in the river and is described as “a running/flowing type” of magnetic water treatment plant.

Within a few hours of the hydro-magnetic system’s operation in the Sochi River, the scientists, as well as thousands of other people who had come to see this experiment, witnessed unique changes.

One change was that shoals of fish could be seen swimming from the direction of the sea towards the water that had flowed through the magnetic system. Because magnetic water coagulates particles floating in the water causing them to sink to the bottom, the water becomes much clearer with visibility improving markedly. Witnesses claim that there were so many fish in the river, it was impossible to see the bottom even though the depth of the river in that area is no more than 1.5 meters.

Widespread interest in the hydro-magnetic system in Sochi lead Omni Enviro to build a complex called a “Magnetic Quay” and located it on the banks of the river.

This complex includes a “Magnetic Coffee Shop”, and a gallery exhibiting magnetic devices. Company representatives are always available at “Magnetic Quay” to explain to tourists the everyday use of magnetic technologies. (OmniEnviro Source link: https://www.omnienviro.com/environment/rivers-lakes.php)

Check out their website for more research and video testimonials! Does this mean fish can swim in cleaner water? Are there any adverse effects in using this magnetic technology? Like a knight coming back after retirement to slay another dragon Sir James Dyson has begun to fashion a river-cleaning barge modeled after his famous Dyson vacuum technology. He explains in an interview with Fast Company “The nets face upstream and skim the surface of the river for floating debris. The plastic waste is shredded on board and then different grades of plastic are separated by a huge cyclone–very similar to the way our cyclonic vacuums work.”

Around a year ago he was quoted saying his project “Recyclone” is still in development.  One of his primary concerns was finding effective ways of preventing aquatic life from being sucked in along with the trash.  Another question that arose was that of sorting larger trash like plastic bottles from smaller trash like plastic beads. In response, Dyson explains that his team is developing a system analogous to the Dyson Vacuum in the sense that it sorts trash from largest to smallest.

Here is a great article and interview inhabitat hosted with Sir James Dyson on his new invention in the works. “The lack of green areas is an overwhelming problem that must be solved, especially in large cities, where there is also an infinite amount of windowless façades. These “non-places” are like a catalyst for great urban problems and exist in the cities’ landscapes as proof of the negative consequences of a city that grows without consciousness.” – from m.90 Manifesto

m.90 is a landscape studio in Brazil driven by a social and environmental impact business model. They aim at increasing green areas in large cities through the installation of vertical gardens, which consequently impact the urban landscape and natural quality of life. On top of installing vertical parks, m.90 also works on vertical gardens in residential and commercial spaces. They are a big proponent of sharing the “why” behind what they do through courses, workshops and lectures. Can you imagine a future where we had vertical farms scaling vast portions of tall buildings in major cities?

Check out their website to read their whole manifesto and keep up on what Guil Blanche (head of m.90) and his team are up to! What a great contest to hold. This is BIG!

In their mission statement the UAE Government says they “…invite the most innovative and creative minds to find solutions that will improve people’s lives and provide positive technological solutions to modern day issues.”

There is a new 2017 competition being held. Click on the graphic above to visit their site for more info!

Who knows what all of the inventors will create, keeping in mind it is for good…a lot could come of such a competition despite their being only one “winner” we may all benefit from the hundreds of new inventions. “We are the one’s we’ve been waiting for” – Xiuhtezcatl

What is more inspiring than seeing the next generation getting involved in the health and future of our planet?

Xiuhtezcatl (pronounced “shu-TEZ-cuht”) has been leading a youth movement to save the planet since he was ordering from the kids menu at the age of 6. He has assembled a global army of young people over the years with his organization Earth Guardians (which just keeps growing bigger!) to demand sustainable policy from world leaders. The Colorado-based organization has over 1,800 crews on six continents — and counting, partially thanks to social media.

In 2014, Xiuhtezcatl founded Rising Youth for Sustainable Environment (RYSE), a youth council that helps to plan, train, and execute an agenda to help combat climate change. Between the council’s role in this federal lawsuit, which was filed on behalf of them by Our Children’s Trust, and the lawsuits they have on the way in other sates, it’s clear they are onto something. I would like to offer my in-principle support for the ‘Soil C Quest 2031’ project focused on the development of a soil carbon fixing fungal inoculum package for broad acre cropping, nationally and internationally.

The project has as its core vision ‘to double soil organic carbon levels in Australian cropping soils by 2031’. Given the importance of increasing soil carbon toward ongoing farming viability, food security, landscape health and climate change mitigation, the importance of the Soil C Quest 2031 project is self evident. It should be supported by anyone who cares about our country’s soils, climate change and the legacy we will leave behind to future generations.